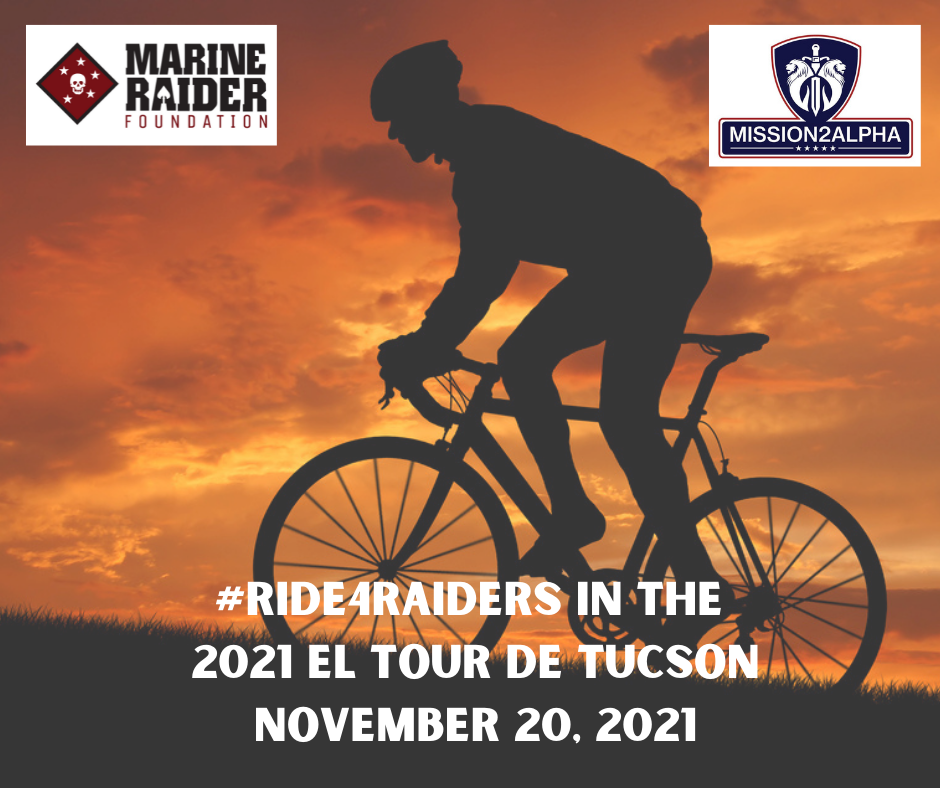 The Marine Raider Foundation and Mission2Alpha are joining forces on November 20th to conquer the 2021 El Tour de Tucson Challenge,  a one-day cycling event with 28, 57 and 102-mile options that travel through Tucson and the Sonoran desert.  The event is in its 38th year and has helped nonprofits raise over $101 million dollars since 1983!

Cyclists can register to ride with the Marine Raider Foundation and Mission2Alpha by visiting https://www.classy.org/event/m2a-and-the-marine-raider-foundations-take-the-el-tour-de-tucson-challenge/e347343

From Perimeter Bicycling Association, the host of the El Tour de Tucson:

“El Tour de Tucson is Perimeter Bicycling’s flagship event and one of the largest  bicycling events in America. Held annually the Saturday before Thanksgiving, El Tour attracts over 6,000 cyclists of all ages and abilities from around the United States and beyond. Since 2005, El Tour’s finish line/annual Downtown Fiesta, brings together cyclists and members of the greater Tucson community for a celebration of charities, community, health and fitness.

As we head into the 38th anniversary of El Tour de Tucson, Perimeter Bicycling wants to emphasize all components are catalysts in driving it to help raise money for more than 100 nonprofits throughout the year.  El Tour de Tucson enables nonprofit, charitable agencies to raise funds for their respective organizations.   Learn about their programs and sign up to ride on their teams here.

In 2019, we reached a significant milestone in being the facilitator for helping charities raise over $100 million through Perimeter’s 37 years of charity work. In 2019, charities raised more than $5.8 million, moving the overall total to $101 million since El Tour started in 1983.  El Tour has come a long way, given in that 1983 with fewer than 200 cyclists, El Tour raised $4,500 in its first ride.

Since then, more than 270,000 cyclists have ridden in Perimeter events. El Tour, of course, has grown considerably since its inception, but the message has long been constant: charity, community, health and wellness through a strong and committed group of nonprofits, thousands of dedicated cyclists and volunteers who know the power of teamwork.”

Event Benefits for all Registered Cyclists