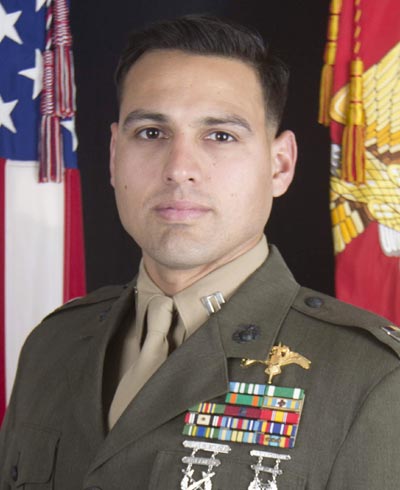 Major Moises Navas was born on 16 December 1985 in David, Panama. After graduating from Quince Orchard High School in Gaithersburg, MD in June of 2004, he attended Recruit Training in Parris Island, SC. He reached the rank of Sergeant before commissioning as a 2nd Lieutenant on 1 July 2010 through the Marine Enlisted Commissioning Education Program. In December of 2010, he reported to The Basic School in Quantico, VA and subsequently attended the Infantry Officer Course, earning the Infantry Officer (0302) MOS.

Major Navas reported to 2nd Battalion, 3d Marines at Kaneohe Bay, HI and served with the Island Warriors from October 2011 to September 2014. He deployed as a Platoon Commander in 2012 in support of the Unit Deployment Program (UDP) to Camp Schwab, Okinawa, Japan. As a Platoon Commander, he conducted multiple bilateral training exercises throughout the Pacific area of responsibility where he was responsible for the training of four foreign partner nations. Upon redeployment, he served as Company G’s Executive Officer, where he led the company through several deployment for training exercises to include the Mountain Warfare Training Center, Bridgeport, CA, Pohakuloa Training Area, HI and 29 Palms, CA. He once again deployed with Company G on a UDP where he conducted three multinational exercises to include training in the Republic of Korea and throughout Japan.