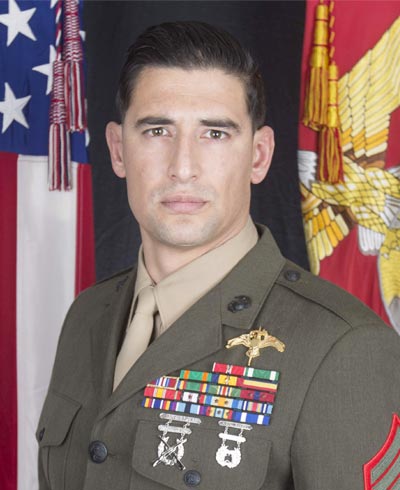 Gunnery Sergeant Diego Pongo was born in Chatsworth, CA on July 19th, 1985. He enlisted in the United States Marine Corps in October 2004 and attended recruit training at MCRD San Diego, CA.  Upon graduation, he was meritoriously promoted to Private First Class.  Upon completion of recruit training, Private First Class Pongo was ordered to School of Infantry West and graduated as an 0311 Rifleman. He was then ordered to 2nd Battalion 23rd Marines at Los Alamitos, CA. PFC Pongo was promoted to Lance Corporal and assigned as a Rifle Team Leader. In December of 2006, he was meritoriously promoted to Corporal and transferred to active duty where he was then assigned to 1st Battalion 5th Marines at Camp Pendleton.  In July of 2007, Corporal Pongo was assigned to the Scout Sniper Platoon and deployed with the 11th MEU in November 2007. In July of 2008, Corporal Pongo attended Scout Sniper Basic Course West and was assigned as a Sniper Team Leader. He was meritoriously promoted to Sergeant in May 2009 and deployed to the Helmand River Valley, Afghanistan the following month.

While serving in MARSOC, Gunnery Sergeant Pongo deployed as an Element Member and an Element Leader to Afghanistan and Iraq. As an Element Leader, he was responsible for the tactical employment, training, accountability, fitness, administration, and logistical support of the element. He was also responsible for the training and tactical employment of partner nation forces to whom he was in support of. He frequently partnered with high-ranking members of Partner Nation militaries as well as Partner Nation Law Enforcement entities to provide mentorship during the planning and conduct of joint and unilateral combat and peacetime operations.  Gunnery Sergeant Pongo served as the Team Chief for MSOT 8232.  He spoke Spanish, European Portuguese and Brazilian Portuguese. He was working on his Bachelors degree in Business Entrepreneurship.