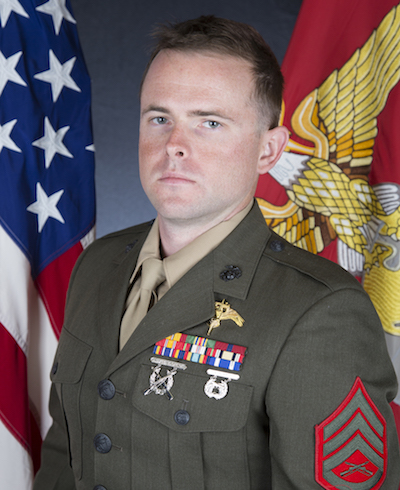 Staff Sergeant Cox was born on May 11, 1989. He was a a native of Ventura, CA.  From a very young age, SSgt. Cox had a passionate interest in building model kits & sketching military-themed blueprints in his spare time. He also enjoyed playing airsoft & going on family camping trips.  SSgt. Cox enlisted in the Marine Corps in July 2007 through the Delayed Entry Program.  In July 2007, he attended Basic Training at Marine Corps Recruit Depot San Diego, CA, as a Reservist.  He then attended Marine Combat Training and the Marine Corps Communication Electronics School, where he was promoted to Private First Class.  Upon graduation, he reported to 4th Light Armored Reconnaissance Battalion for duty as a Field Radio Operator.

In October of 2008, PFC Cox transferred to 2nd Battalion, 23rd Marines Weapons Company, where he acted as Company Radio Operator in support of Operation Iraqi Freedom and was promoted to Lance Corporal.  The unit deployed to Iraq from March to September of 2009, and upon return, the unit conducted BALTOPS 2010, conducting joint training exercises with the Estonian military in June 2010.

In January 2010, Lance Cpl. Cox went back into a reserve status and attended Moorpark Community College, working towards a transfer degree with an emphasis on Anthropology.  He transferred to 3rd Air Naval Gunfire Liaison Company (ANGLICO) in August 2010, and was promoted to Corporal in January 2011. He deployed attached to 1st ANGLICO in support of Operation Enduring Freedom, and upon his return, Cpl. Cox continued to pursue higher education at Ventura Community College.  Cpl. Cox was promoted to Sergeant in April 2012 and in August 2012, he attended the Joint Fires Observer course where he earned the title of honor graduate.

After attending the MARSOC Assessment and Selection course in April 2013, Sgt. Cox attended the Reserve Sergeant’s Course in Quantico, VA, once again earning the title of Honor Graduate. He also continued his studies at Ventura College until December 2013, when he detached from 3rd ANGLICO and reported for duty to the Marine Special Operations School’s Individual Training Course in January 2014. Upon graduation, he attended the Basic Language Course in the study of Arabic, graduating in April 2015. He was stationed in Camp Lejeune with Hotel Co., 2nd Marine Raider Battalion. While being assigned to MSOT 8234, he attended multiple training evolutions, including the Static Line Naval Parachutists Course and Exercise Jade Helm 2015. In January 2016 he deployed to Lebanon in support of CNT operations, attending the Marine Combatant Dive Course upon his return.